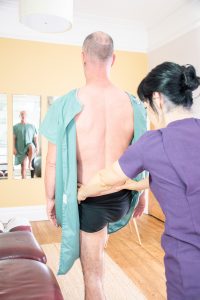 Osteoarthritis - Hip OA can produce pain in a number of locations including the side of the hip, buttock, groin, front of thigh and even knee pain. These commonly build over a period of time and are accompanied by restricted movement.

Bursitis / Synovitis - Literally translates as inflammation of the bursa (fluid filled sac that cushions the joint). Characteristically causes sharp, severe pain on movement, and may be associated with an underlying or chronic problem involving joint tendon and muscle function.

Tendonitis - Inflammation of a tendon. Most commonly an overuse or misuse injury. Associated with pain on movement, usually sharp/acute pain in nature.

Snapping Hip - Incorrect function and /or weakness of the hip muscles can cause tendons to flick over bony protuberances as they move creating a clicking sensation. Snapping hip is often painless but can lead to problems such as tendonitis, bursitis or muscular pain.

Sacro-iliac Joint Problems - Tissue inflammation may affect the nerves as they exit the spine resulting in leg pain, numbness, pins and needles.

Meralgia Parasthetica - This produces pain (often burning in nature) and numbness or tingling over the outside of the thigh, classically described as a 'hand in pocket' distribution. Caused by irritation of the lateral femoral cutaneous nerve as it passes through the groin.

Muscle Sprain/Strain - Excessive, incorrect or repeated stress through a muscle can cause overloading or fatigue leading to fibre damage described as a strain. The same affect on a ligament produces a sprain. Both result in pain and may also produce weakness and swelling.